Have You Voted for All-Star Week?

If you didnt know B.A.S.S. has been doing the voting for All-Star week.  Below is from Bassmaster.com where you cast your vote.  So if you have not been voting make sure you do even if it is only to win a Skeeter ZX 190!

"In addition to the Toyota Tundra Bassmaster Angler of the Year Top eight anglers, another four anglers will be chosen by you to fish the 2012 Toyota Trucks All-Star Week. Twelve finalists will be selected from all entries and paired virtually with one of the twelve anglers. If your angler advances, you advance. If you’re paired with the angler that wins the Evan Williams Bourbon All Star Championship, you’ll win a Skeeter ZX 190 powered by a Yamaha VZ 150 TL!"

Look for this picture on the page and click on it.  Good Luck.

Posted by Chris McDonald Fishing at 10:22 AM No comments:

Brent Chapman has had an amazing 2012 Bassmaster season.  Earlier this week this picture made its rounds on Facebook. Even with that guy flying over Chapmans stop he is still in 6th place at Oneida Lake.  With that he has clinched the AOY.  This pic will be making its rounds on Facebook soon. 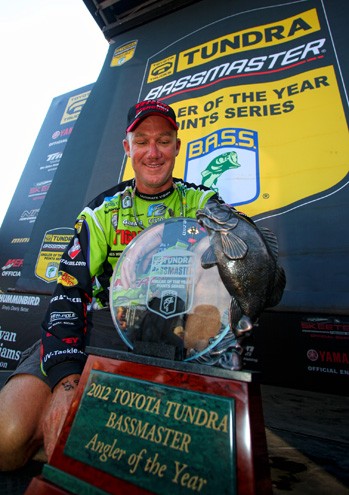 Congrats to Brent for all his hard work!  Also to his family as well! 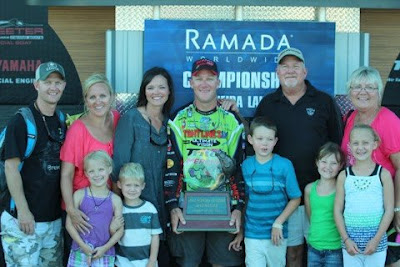 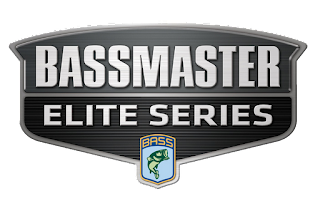 Well it is official the 2013 Bassmaster Elite series schedule is out. It looks like it is going to be a good year for the Elite guys. It’s cool to see the Elites going to Falcon and I am super excited about them going to Lake St. Clair in August. The only lake I wish was on the schedule this year is Smith Mountain Lake I would like to see them back there.
Bassmaster Classic - Grand Lake - Feb. 22-24
Sabine River Challenge - Sabine River - March 14-17
Falcon Slam - Falcon Lake - March 21-24
Bull Shoals Quest - Bull Shoals Lake - April 18-21
West Point Lake Battle - West Point Lake - May 2-5
Alabama River Challenge - Alabama River - May 16-19
Mississippi River Rumble - Mississippi River Lacrosse - June 20-23
St. Lawrence River Showdown - St. Lawrence River - Aug. 8-11
Lake St. Clair Championship - Lake St. Clair - Aug. 22-25

What Lake or Lakes do you wish were on the schedule?
Posted by Chris McDonald Fishing at 7:18 AM No comments: 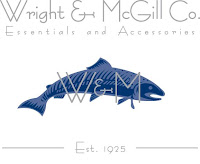 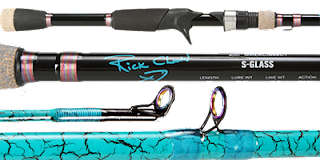 The rods are by far some of the coolest rods I have ever seen.  They feature a turquoise crackle finish and holographic zirconium guides (even thought I have heard a lot of people say they don’t like the color).  Not only do the eyes look cool they reduce weight and improve casting distance.  Which I can truly say they do, I can cast the same lure with the same reel a greater distance with this rod then I can on other rods I use for lipless baits.
The Rick Clunn rods feature the same S-Glass blank construction that the Skeet Reese cranking rods have.  The S-Glass delivers incredible power, a super soft feel which improves your fish catching.  I have caught 44 fish including bass, pike and catfish on this rod.  It holds up well to a big fight, without ripping the lure free from a fish’s mouth.
I was impressed from the first time I saw the rod.  The color of the rod and the eye lit color are amazing.  I was even more impressed by the rod once I used it.  Like I stated earlier I am able to outcast other set ups I have used for lipless baits in the past.  It also has incredible feel, I can tell the difference between a strike and grass better than I have ever been able to before.  The rod loads incredibly well and setting the hook is easy, and at times the bass do all the work for you.
I used an Abu Garcia Black Max reel on the rod and the setup was well balanced.  Rick Clunn told me he has been using the Skeet Reese reels on his rods (at I cast 2012 Clunn’s line of reels were introduced).  Whatever reel you put on it, the split handle helps to balance the rod out in your hand.  I threw a lipless bait for hours the first time I used it and never felt fatigue.  The rod is light weight and it is easy to work all day long.
I highly recommend the Rick Clunn Lipless rod.  It gets 5 out of 5 in my book.  It cost 89.99 at Bass Pro Shops, which is right on par with the Wright & McGill tech specific rods.  You can find out more about all of the Rick Clunn rods at www.wright-mcgill.com.  I hope to be adding to my rod collection with other Rick Clunn rods in the future, and maybe even a few of the new Rick Clunn reels.  If you are looking for a lipless crankbait rod don’t overlook the Rick Clunn lipless rod.
Posted by Chris McDonald Fishing at 8:48 AM 1 comment:

Bass Master is reporting that Rodney Ply from Arkansas caught a world record striper on Bull Shoals in February.  This one fish could be worth 1.1 million dollars because he had signed up for Mustad’s hook a million contest.  The long and sort of it is “Arkansas is okay with the bait but not okay with the way the fish was weighed even though it apparently has sanctioned records weighed like that in the recent past. So thus far, no $100,000 for Rodney for a state record.  The IGFA is okay with the way the fish was weighed, but is not okay with the bait. So thus far, no $1 million for Rodney for a world record.”  You can read the whole story on BASSMASTER.COM.  The bait was a homemade spinnerbait with multiple arms like an umbrella rig.
“Anglers have started a petition HERE asking the IGFA and Mustad to "please recognize and reward Rodney Ply's world record striped bass.”  I hope all of the my readers will go and sign the petition to help Rodney Ply.
Posted by Chris McDonald Fishing at 4:21 PM No comments:

I love catching bass and when my hands get smelly it’s not a big deal, really it is a trophy of the bass you have caught.  However when I hook a pike I hate the way my hands smell after letting the toothy critter go.  I have carried soap on the boat and even tried the orange hand cleaner, but they are a pain and take so long after you let the fish go that sometimes you lose your spot you are fishing.
Soap also doesn’t work that well on grease or oil if you have to make an on the water repair.  I was in my local Wal-Mart when I came across a new product.  The Heavy Duty hand wipes from Grime Boss.  They come in a pack and you pull one or two out as you need them like you would do with baby wipes.  It has a lid you shut that keeps them fresh and to keep them from drying out.
I have been using them all summer long and I have to say they work great.  The fact that they are so handy and do not take up much room are a plus.  They work great for fish smell but also cut and remove oil, gas, grime, dirt and gunk from your hands.  After working on the boat they help cut the filth on my hands, better than most of the soap I have in the house.  I also am able to clean my hands before I go into the house saving me from making a mess on door handles and such.
You can find them at retailers like Home Depot, Wal-Mart and Auto Zone to name a few.  They come in 10, 18, 30 and 60 packs.  The 10 and 18 packs are perfect for the boat because of the size.  The 30 pack size runs about $4.99.  The only down side is that you have to have a place like a trash bag or can to put them.  They do not decompose in the water.
Overall, the Grime Boss hand wipes are great additions to your boat.  They clean your hands and help get rid of that fish smell.  I would give them a 5 out of 5 because they work better than any other thing I have ever had in the boat for cleaning your hands and they are fairly inexpensive.  You can find out more at Grimeboss.com
Posted by Chris McDonald Fishing at 9:07 AM 3 comments:

How to Apply for new Fishing TV Show 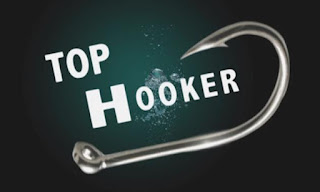 We all dream of being the next big fishing star.  Look out KVD, Ike and Clunn (Your Name Here) is going to be the next big star.  Well maybe you can be if you are chosen to be on the new TV show.  The Producers of TV shows like TOP SHOT, DIRTY JOBS, AND WICKED TUNA  are now looking for America’s best fisherman for a new competition show.  Top Hooker is looking for applicants for their show which is an extreme fishing competition
You have to register by Deadline to apply is August 28, 2012.  If you want to apply send a email to with your name, phone number, location, a recent photo, and a brief explanation of why you could be America’s first Top Hooker.
Chris McDonald Fishing won’t be applying but I hope you do.  Good luck!  One more thing you have to be 21 or older to apply!
Posted by Chris McDonald Fishing at 2:01 PM No comments: 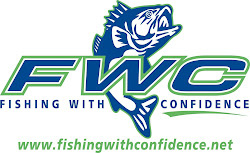 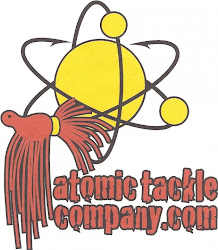